By Dr. Patrick Slattery — As a former professor of media and politics, I have long been a harsh critic the mainstream media for prostituting itself to the Zionist agenda, whether in its reporting on Israel or its enforcement of a taboo on information about Jewish power in the United States. I have also been critical of some of the alternative media, including Democracy Now!, which is by and large a good source of information on Israel but upholds other aspects of the Jewish supremacist agenda.

Another media  is the “alternative media” of Alex Jones which supposedly opposes the New World Order and the Globalists. He has actually defended Israel’s mass murder and terror against Gaza. At the same time he decries the NWO control over America, he has nothing to say about the NWO support of Israel in the massacre in Gaza. Does he think the Palestinians are part of the NWO. No in fact by supporting the Israel-USA-Globalists he of course is actually supporting the NWO. One way he does this is by barely covering the Zionist murder and terror in Gaza.

Today as I scanned the alternative media for information about Israel’s sadistic assault on Gaza, I happened by the PrisonPlanet.com website of Alex Jones. To my amazement, on its homepage not a single one of the ten “featured stories” related in any way to the crisis. Many of the featured stories seemed to me to be of little importance, but you can judge for yourself by looking at these headlines from July 24.

Now, I am not saying that the site does not report on news from the crisis. Four of the five links in the “most popular” box were Israel/Gaza stories. Which begs the question: If the most popular articles on PrisonPlanet are on the Gaza crisis, why then were no such articles being promoted as “featured stories?”

Other alternative sites, including RT, PressTV, Democracy Now!, Rense, and of course DavidDuke.com, provide a wealth of information on what is undoubtedly the biggest issue in the world this summer. And of course the mainstream Ziomedia also features the issue prominently, although almost exclusively in the form of misinformation and propaganda.

While I am certainly not accusing PrisonPlanet of promoting Zionist propaganda regarding Gaza, I think that in consideration of the important position the site has secured for itself in the alternative media, it has the responsibility of prioritizing news on this most critical event over the frankly frivolous items that appeared in its featured stories section. -ps 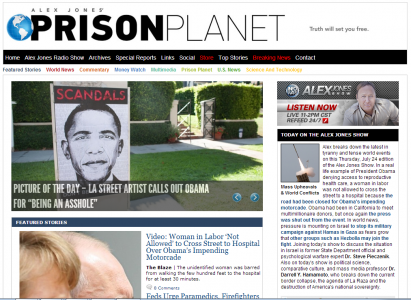 Video: Woman in Labor ‘Not Allowed’ to Cross Street to Hospital Over Obama’s Impending Motorcade

The Blaze | The unidentified woman was barred from walking the few hundred feet to the hospital for at least 30 minutes.

Paul Joseph Watson | Injuries may be sign of “suspicious activity.”

Kurt Nimmo | More than 4 million women would be affected.

Why Is Wal-Mart Preparing For A Major Earthquake On The New Madrid Fault?

Michael Snyder | Buried in a Wall Street Journal article from about a week ago was a startling piece of information.

Is THIS Why the Plane Was Shot Down?

Washington’s Blog | Report: Ukrainian Fighter Jets Hid Behind Passenger Plane, Pulled Away and Dropped Bombs, and Then Hid Behind Plane Once Again.

Calm Down … You Are Much More Likely to Be Killed By Boring, Mundane Things than Terrorism

America The Divided: Everyone Knows We Have Problems But There Is Very Little Agreement On Solutions

Michael Snyder | A house divided against itself will surely fall.