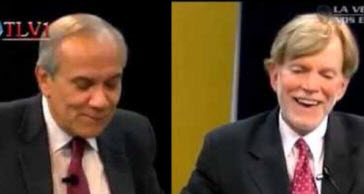 Today Dr. Duke had Argentine Presidential Candidate Adrian Salbuchi as his guest for the hour. They discussed the situation in Argentina and Latin America, and how some of its problems could be dealt with. Mr. Salbuchi laid out his platform for governing, should he be elected. They also talked about important aspects of Argentine history, such as they way the country was kicked around by a soccer ball by the U.S., Britain, and the Soviet Union, each of which formented regime change, revolution, and war. Also, Mr. Salbuchi explained the political philosophy of the late great President Juan Peron.

Next Post CNN president expects Trump to see out his four-year term — Why shouldn’t he? — Zio-Watch, Mar 9, 2017