Commentary — Steve Miller may be Jewish, but is one of the few people in the Trump administration who seems to support the Trump agenda. If you haven’t seen the Miller-Acosta exchange, it’s worth a view. And now, something completely different… 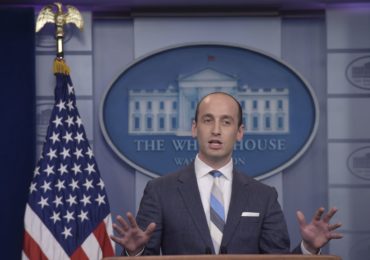 White House senior policy adviser Stephen Miller speaks during the daily briefing at the White House in Washington, Wednesday, Aug. 2, 2017. (Susan Walsh/Associated Press)
By Hillel Italie | AP August 3 at 3:42 PM
NEW YORK — When senior White House aide Stephen Miller disputed the significance of Emma Lazarus’ poem on the Statue of Liberty, he wasn’t stating a new opinion.Members of the far-right community, including such white supremacists as David Duke and Richard Spencer, have harshly criticized the poem and even used anti-Semitic language.“It’s offensive that such a beautiful, inspiring statue was ever associated with ugliness, weakness, and deformity,” Spencer tweeted in January, referring to such words by Lazarus as “wretched refuse.”
“The claim that America was to welcome ‘the wretched refuse of your teeming shore’ is a Jewish demand upon America, and not the original intention of the Statue of Liberty,” Duke wrote in 2012, noting that Lazarus was Jewish.

Miller’s comments about the poem, “The Great Colossus,” came during a press conference Wednesday when he defended President Donald Trump’s proposal to dramatically reduce legal immigration and shift the nation toward a system that prioritizes merit and skills over family ties. Miller noted, correctly, that the poem was not originally on the Statue of Liberty, but added 17 years later. He was responding to a question from CNN’s Jim Acosta, who asked whether the legislation violated the spirit of Lazarus’ words.

Among those praising Miller was Breitbart News, the alt-right publication once headed by Steve Bannon, now Trump’s chief strategist. “Trump Adviser Miller Schools Acosta: Statue of Liberty Poem on Huddled Masses Added Later” reads a headline on breitbart.com. The White House did not immediately respond to a request for comment.

But Lazarus’ words about the “huddled masses yearning to breathe free” have since been widely absorbed into American culture and helped make the statue synonymous with welcoming people from abroad. During a 1986 ceremony marking the statue’s centennial, President Ronald Reagan noted Lazarus’ ”very special dedication” and emphasized the statue’s importance not just to “immigrants who stand out” but to “those whose names are remembered by only a few.”

“Many of them passed through this harbor, went by this lady, looked up at her torch, which we light tonight in their honor,” Reagan said. “They were the men and women who labored all their lives so that their children would be well fed, clothed, and educated, the families that went through great hardship yet kept their honor, their dignity, and their faith in God. They passed on to their children those values, values that define civilization and are the prerequisites of human progress. They worked in our factories, on ships and railroads, in stores, and on road construction crews. They were teachers, lumberjacks, seamstresses, and journalists. They came from every land.”

Copyright 2017 The Associated Press. All rights reserved. This material may not be published, broadcast, rewritten or redistributed.

Previous Post Why is Wasserman-Schultz covering up for Muslim IT guy arrested while trying to flee the country?