President signs bill into law that could effect several organizations and symbols with a punishment of up to three years in jail.

Romania’s president has signed into law legislation that punishes Holocaust denial and the promotion of the fascist Legionnaires’ Movement with prison sentences of up to three years. 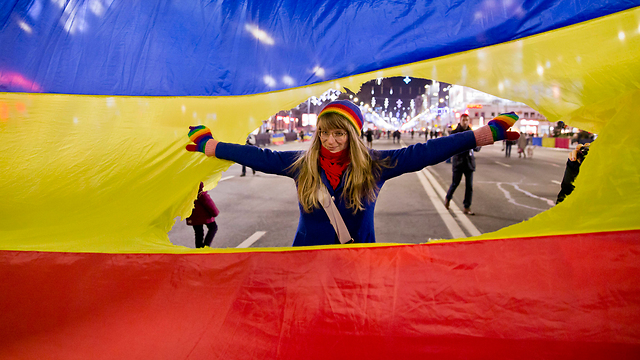 A satirical website has accidentally broken a real news story – by revealing that America offered Israel “a nice, big shipment” of weapons to try and salve its anger at the Iran nuclear deal.

A spoof news story on The Onion, headlined “US Soothes Upset Netanyahu With Shipment Of Ballistic Missiles”, appeared 24 hours before reports emerged that this had actually happened in real life.

Israeli newspaper Haaretz noted the similarity to its own story, published the following day, which carried the headline, “After Iran deal, Obama offers military upgrade

Ukraine crisis: ‘Putin is obsessed with the idea of testing Nato’ – and the Baltics will be next, says Odessa governor Mikheil Saakashvili

In the first extract of an exclusive two-part interview, former Georgia president Mikheil Saakashvili – now governor of Odessa – reveals why he believes Putin is such a serious threat. And not just to Ukraine

At first sight it seemed an improbable appointment: a man who had served twice as president of neighbouring Georgia, parachuted in as governor of a single region of Ukraine. But for the government in Kiev, beset in the east by pro-Russian rebels, and facing entrenched corruption and an array of powerful oligarchs elsewhere, it was an obvious choice.

Two months later, Mikheil Saakashvili, exiled from the country he once ran, is settling into his new role as governor of Odessa – not just the Black Sea port city with its population of one million, but the wider and strategically crucial region around it.

(JTA) — New York Sen. Chuck Schumer was not actually in New York on Wednesday, but the Democrat’s influence on the fate of the Iran deal loomed large when several thousand people descended on Times Square to protest the agreement.

Many of those demonstrating against the agreement chanted “Where is Chuck Schumer?” and “Kill this deal.” Some who packed the sidewalks along Seventh Avenue also held up signs that urged Schumer to convince Congress members to vote against the deal reached July 14 between Iran and six world powers to limit Iran’s nuclear program in exchange for sanctions relief.

The most senior Jewish senator is in a tough position: The Iran deal forces him to straddle his allegiances to his political party and the large Jewish constituency he serves in New York. Schumer, who hopes to assume the party’s leadership once Sen. Harry Reid, D-Nev., retires next year, is thought to have considerable power to influence other key Democratic lawmakers.

WASHINGTON (JTA) – Hundreds of pro-Israel activists from across the country will descend on Capitol Hill next week to press members of Congress to reject the nuclear deal with Iran.

The July 28-29 fly-in, which will bring to this city some of the most dedicated of the 100,000-strong membership of the American Israel Public Affairs Committee, is part of a multi-pronged effort by the pro-Israel lobby aimed at killing the agreement reached July 14 between Iran and the world powers. The campaign, according to top pro-Israel officials who briefed reporters on Wednesday, will also include TV ads by a new AIPAC-backed nonprofit dedicated to killing the deal, calls and emails by activists to their congressional representatives, and attendance at town hall meetings lawmakers are expected to convene during the August congressional recess.

Congress has two months to consider the deal, and the Republican leadership in the House of Representatives and Senate has indicated there will be a vote. If the lawmakers vote to disapprove, President Barack Obama has said he will veto their action. If congressional opponents can manage to muster the two-thirds majority in both chambers necessary to override a veto, it will kill the deal.

READ: The campaign for (and against) the Iran deal gets personal
Click here for the full story

Stock fraud suspects appear in court as US seeks extradition

Gery Shalon, suspected of being involved in several fraud schemes tied to the NYSE and a massive data breach at JPMorgan Chase & Co. seen at the Jerusalem Magistrates’ Court, July 22, 2015. (Yonatan Sindel/Flash90)

The Jerusalem Magistrate’s Court on Wednesday extended the remand of two men the US wants to extradite over alleged involvement in a hacking and fraud scam that manipulated prices on the New York Stock Exchange.

Gery Shalon from Savyon and Zvi Orenstein from Bat Hefer were remanded in custody for a further 20 days while the extradition request is under review.

“These are serious crimes that were systematically carried out by an organized group of several criminals using advanced means,” the prosecutor said, noting that according to emails seized by police some of the alleged activities were still ongoing.

If convicted in the US, the men could face up to 20 years in prison.

The FBI estimates the incident is one of the biggest cyber-crimes in recent years and involved operatives in Moscow, Tel Aviv and Florida.
Click here for the full story

US source says about 16 decommissioned attack helicopters given to Jordan last year to fend off potential attacks from ISIS. Israel has given retired US-supplied Cobra combat helicopters to Jordan to help the Hashemite kingdom fend off insurgent threats on the Syrian and Iraqi borders, a US official with knowledge of the deal said.
The handover, initiated last year, was approved by Washington, which provided mechanical overhauls for the aircraft before they were incorporated free of charge in Jordan’s existing Cobra fleet, the official said.
Click here for the full story

Israeli woman arrested in Thailand after bullets found in her bag

Woman was released from the IDF only 5 days before going on vacation with her family and forgot to remove the M-16 bullets from her bag. An Israeli in her 20s on her way to Thailand on vacation was arrested on Wednesday at the Bangkok Airport after security found 13 bullets for an M-16 rifle in her bag, forgotten there after she was released from the IDF only five days prior.
She was questioned at a police station in the airport, and on Thursday she is expected to be brought in front of a military judge. The young woman landed in Bangkok on a layover on her way to Chiang Mai when the bullets were discovered. It is unclear why the bullets were not discovered during the security check at Ben-Gurion Airport.
Click here for the full story

A sailor stands watch over a cell block in Guantanamo Bay’s detention facility while detainees look through magazines and books, on March 30, 2010. (illustrative photo: Joshua Nistas/US Navy/Department of Defense)

WASHINGTON (AP) — The White House is close to bringing Congress another plan for closing the prison for terrorism detainees at Guantanamo Bay, Cuba, a campaign pledge that President Barack Obama hasn’t given up on, his spokesman said Wednesday.

Under a defense policy bill passed by the Senate, lawmakers would consider the White House plan and decide whether to ease restrictions that make it harder for Obama to transfer detainees out of the prison at the US naval base in an effort to close it.

The White House has threatened a veto of the defense bill over several issues, including if it makes it harder to close the Guantanamo Bay prison. Congress has repeatedly stymied the president’s plans to close the prison in the past, however, and Obama has backed down from similar veto threats.
Click here for the full story