The Jewish media—directed specifically for Jews, as opposed to the Jewish Supremacist-dominated mass media, which is directed specifically at non-Jews—has erupted in rage over the remarks by British Member of Parliament Andrew Bridgen over how the “Jewish Lobby” in America controls that country’s government and policies.

The Incredible Hypocrisy of the Jewish Controlled Media

The admitted most powerful lobby in the American Congress is  AIPAC. It is overwhelmingly run by Jews and financed by Jews and openly states its dedication to Israel the “Jewish State.”

The biggest and most powerful Jewish and Israeli advocacy group on earth, (billions in funding) is the Council of Presidents of Major Jewish Organizations which proclaims their dedication to the Jewish State of Israel and the Jewish people worldwide.

Israel calls itself a Jewish state and has Jewish symbols on its military fighters and tanks and even on its bombs.

But to mention the existence power of the Jewish Lobby is labeled as “Anti-Semitism.”

Bridgen made the remarks during the recent debate in the British parliament on recognizing a Palestinian state—if it were ever to be created. Bridgen asked of his fellow Tory MP and Vive-Chairman of the ‘Conservative Friends of Israel’, James Clappison:

Even though this was a perfectly reasonable and accurate comment—after all, the Jewish lobby often boasts by itself how powerful it is in Washington DC—the mere fact that a non-Jew has dared to mention the power of the Jewish lobby in public has driven the Jewish media into a frenzy.

Leading the charge against Bridgen was the Jerusalem-based Times of Israel, which quoted Bridgen as saying that he “was parroting what he heard” that the US “Congress is cowed by Jewish interest groups.” 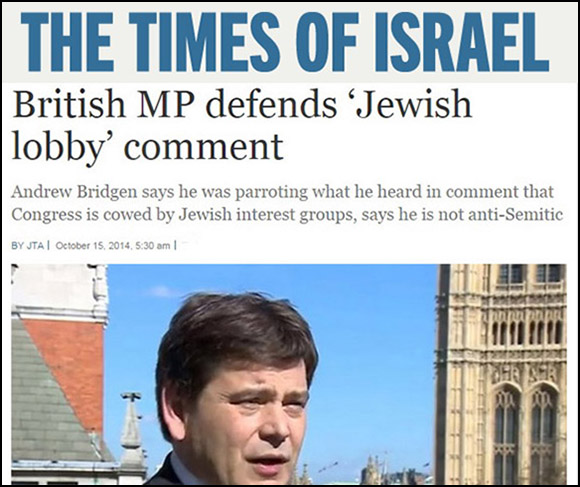 Next in the attack dog lineup was Breitbart News (originally started by Andrew Breitbart, who claimed to have had a Jewish mother). This news source interviewed Bridgen who repeated his claim that his

[C]omments on the influence of the “Jewish lobby” were not his own words, but were remarks that he was echoing, originally made by U.S. politicians that he visited in Washington, D.C. over the summer. 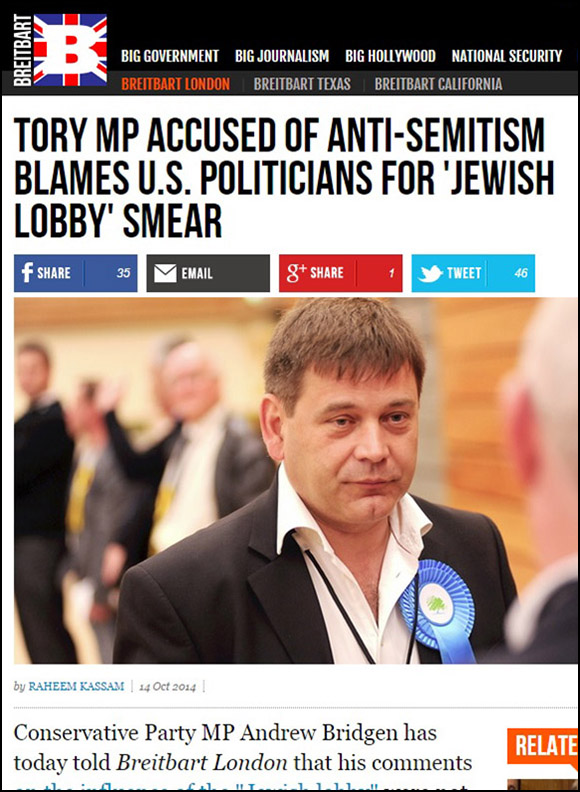 Mr Bridgen’s comments were picked up by commentators online as being deeply anti-Semitic in their tone.

Speaking exclusively to Breitbart London, Mr Bridgen acknowledged that the use of the anti-Semitic phrase ‘Jewish lobby’ was perhaps not the best turn of phrase, but blamed American counterparts for putting the words in his mouth. He did not offer an apology to Britain’s Jewish community, who are understandably incensed by the matter.

“I had the pleasure of visiting the U.S. Congress and the Senate in the summer,” Bridgen said.

“I met with many Congressmen and Senators of both parties and it was alleged to me that no American politician would be remotely critical publicly of anything Israel does because as they put it, if they do, their opponents in the elections or in the primaries would have millions of dollars dropped into their campaign fund, without even asking, to get rid of them.

“To have a situation where America’s political figures can’t make any comment remotely critical of Israel is in my view unhealthy, I do feel that it falls to Britain to be, when necessary, a critical friend of Israel. I can only regard the words and phrases that were used in Washington as the truth as those politicians saw it.

The Jewish Algemeiner was next to attack Bridgen. In an article titled “Guardian Fails to Report Anti-Semitic Comment by Tory MP,” that news source quoted Bridgen’s original comments, and then went on to claim that what the politician had actually meant by this was:

Since U.S. government policy in the Mideast – even under a liberal Democratic President – is effectively controlled by Jewish money and undue Jewish influence, it is up to the U.K., free of the yoke of such powerful Jewish lobbyists, to speak truth to power. 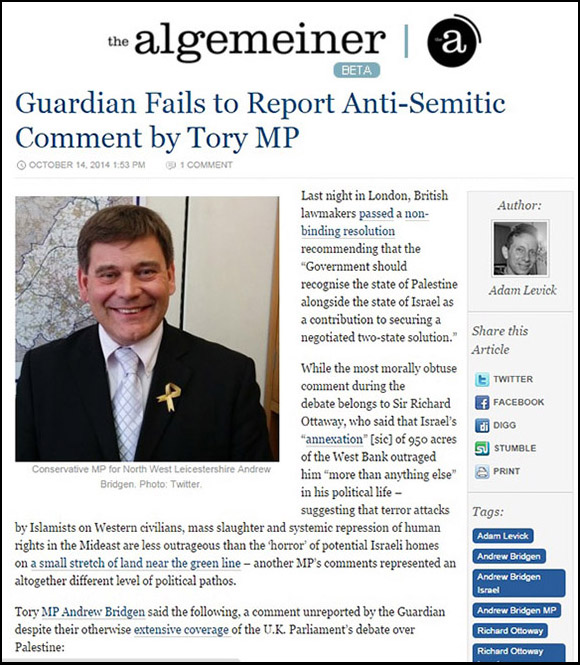 The Algemeiner then (of course) denied that the Jewish lobby does control Congress (even though The New Yorker recently boasted how the US Government “marches to a Jewish drum”).

The Jewish Daily Forward was next up to attack Bridgen: 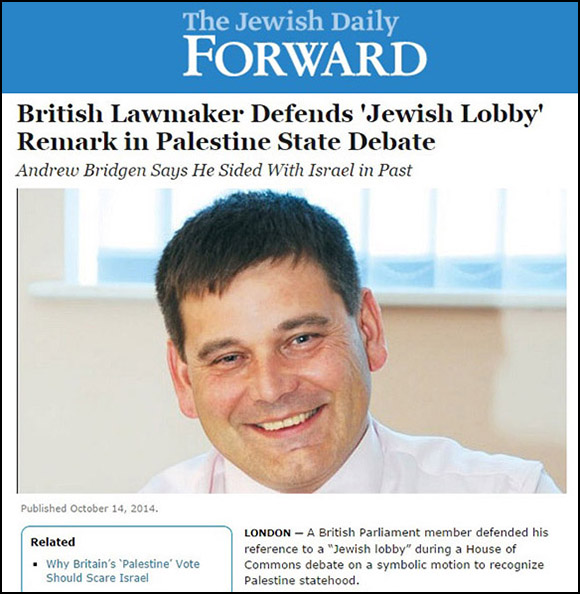 This was closely followed by the UK’s Jewish News, which reported as follows:

After being contacted by Jewish News for clarification, the MP for North West Leicestershire stood by the remarks made in Parliament on Monday night. 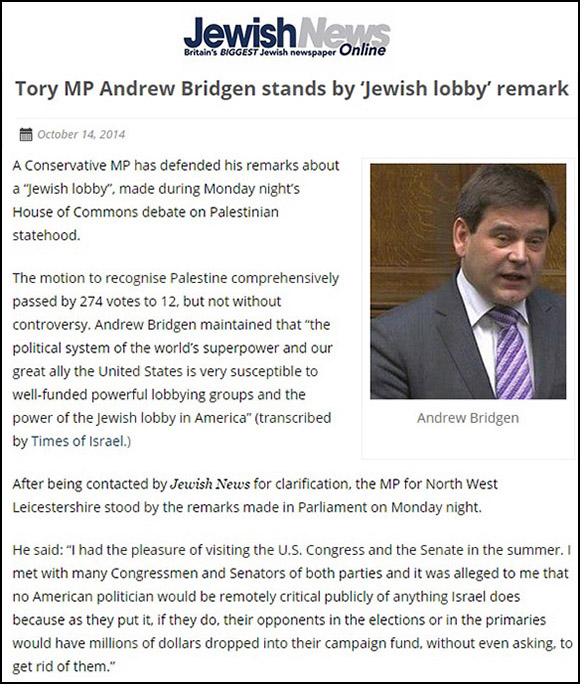 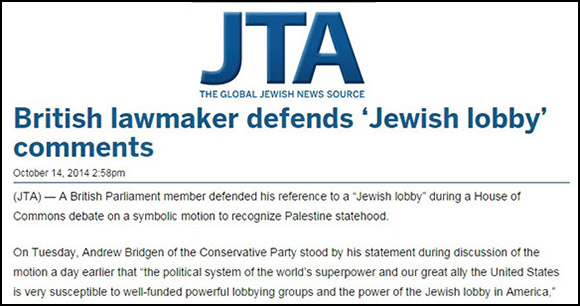 The outburst of anger in the Jews-only press about Bridgen’s remarks is significant on two levels:

– firstly, the lack of coverage in the Jewish-dominated mass media directed at Gentiles reveals once again the Jewish Lobby’s ability to censor news stories they do not want non-Jews thinking or knowing about; and

– secondly it shows just how sensitive the Jewish lobby is to any exposure at all of their nefarious behind-the-scenes activities.

Even though Bridgen has said nothing that Jewish news sources have long openly boasted about—their control of the US government—and phrased it in such a way that it was actually meant to be supportive of Israel, the mere fact that a non-Jew has dared to mention Jewish Supremacist power, is enough to bring the figurative biblical plagues and Jewish curses down upon him.

Previous Post Hear Dr. David Duke on How the Zionist Dike is Breaking

Next Post Hear Dr. David Duke on Palestine and the Jewish Lobby