Dr. Duke starts the show by talking about the role of Zionist media propaganda in covering up the massacres that paved the way for the founding of the Jewish State of Israel. 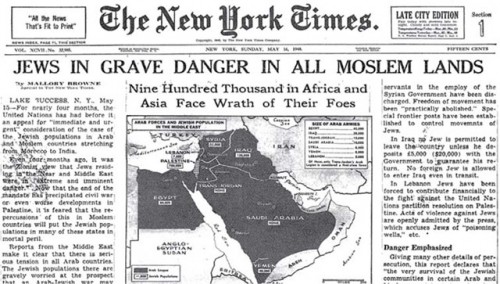 He then discusses a report from the media watchdog group “Fairness and Accuracy in Reporting” (FAIR) that uses multiple New York Times articles to illustrate that reporters and columnists at the Jewish-owned and run Times consistently refer to Iran’s nuclear weapons program as a fact even though the paper has reported on U.S. official intelligence estimates which state that no such program exists today. FAIR contrasts this with the Times reporting on Israel’s vast nuclear weapons arsenal, about which there is massive evidence but that the Times always reports as if it were conjecture and hearsay.

Dr. Duke and Dr. Slattery then discuss similar examples of New York Times propaganda about the Middle East from the past, including the lie that the Iranian President threatened to “wipe Israel off the map” and the constant drumbeat about Saddam Hussein’s weapons of mass destruction.

They describe the horrors that we would face if we don’t stop this Zionist push for wars in the Middle East and Europe. This is a powerful show that you will want to spread widely!