Awareness of the dangers that Jewish Supremacism pose to the existence and freedom of people of all races and walks of life is slowly spreading—and is nowhere more in evidence than in the growing popularity of the French-Algerian comedian Dieudonné M’bala M’bala, the man behind the ‘quenelle’ salute. 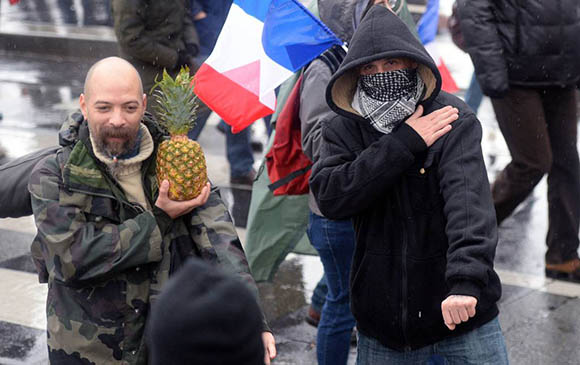 A new article in the Independent newspaper about Dieudonné, which carries with it the usual snide attack style of the Jewish-Supremacist influenced media, serves to highlight the point.

According to the article, written after a journalist attended a sold-out stand-up show by Dieudonné, “Howls of gleeful fury greet Dieudonné’s every reference to a French politician, or to his alleged ‘persecution’ by the French establishment” and “Louder howls and boos greet every reference to a Jew or to a Jewish organisation.”

The article goes on to quote Dieudonné as playfully making his political points:

“What the f*** are all you lot doing here?” he asks. “The media and the politicians and the thinkers have ordered you not to come. You must all be crazy anti-semites, assassins and wicked sorcerers. I almost didn’t turn up myself.”

The audience, the article says, is 5,000 strong, “mostly white and working class. There are older people and some students, but the great majority seem to be in their thirties and forties.”

The journalist goes on to say what is most likely being thought about and discussed endlessly in Jewish Supremacist circles around the globe:

“Looking around the people crowded into the Bordeaux ice-rink, it is difficult to believe that they were sincerely anti-semitic. Most have probably never met a Jew. And yet, in January 2014, to hear 5,000 people baying angrily at each mention of a Jew is deeply unsettling.”

Once the world—regardless of race or origin—wake up and see the threat which Jewish Supremacism poses to everyone, and acts in unison, the power of racist, hypocritical Zionist Supremacists will be at an end.

When that day dawns, the people of the world will be able to peacefully sort out their problems and issues, independently of the interference of the divide and conquer Jewish Supremacists.